Like they’ve done in every other country in the world, people in Mexico are bracing for the impact of the Coronavirus. They’re not even close to the top of the proverbial curve as the spread of infection started later than that in the U.S., but they’re already feeling the effects.

Unfortunately, the news is not good from an economic standpoint, in large part due to Mexico’s symbiotic relationship with the United States. More than three quarters of goods exported by Mexico are sent to the United States. With the U.S. economy likely heading toward a recession, the slowdown in exports will cause major damage to the Mexican economy. There are also a large number of citizens who live in Mexico and cross the border each morning to go to their jobs in hospitality, construction, and other U.S. industries that are experiencing a drop in business.

Additionally, Mexico counts on global tourism to support their economy. Approximately 10% of the Mexican GDP comes from tourism, but with cruise ships and airlines all but shut down, the infusion of money that normally comes from tourism is expected to dry up. Another 18% of the GDP comes from petroleum sales, and crude oil prices have fallen precipitously as the fear or a pandemic-driven global recession grows.

As of April 10th, Mexican officials claim to have approximately 3,500 confirmed cases of coronavirus among the population, with nearly 200 of those resulting in a loss of life. The limited availability of testing, however, calls into question the accuracy of these numbers.

Not unlike the American federal government, the Mexican authorities have not responded in a coordinated way, such as country-wide shelter in place orders. Each city and state has been left to manage the situation locally. Their president, Andres Manuel Lopez Obrador, has downplayed the severity of the virus and the pandemic itself, which in turn has prompted people to be less likely to take the early steps necessary to curtail the spread of COVID-19. And sadly, the Mexican healthcare system is in no way prepared for the type of growth in infection rates that have occurred in other parts of the world.

Where does that leave Mexico?

As a poor country, Mexico will probably be impacted more severely than wealthier ones, partially due to the fact that they can’t afford to prop up the economy with government stimulus packages. On the other hand, Mexico has an opportunity to become a bigger player in the supply line for items like medical devices and electronics that are traditionally imported from China into the U.S. The hope is that if they can step up production and distribution at a time when specific resources are scarce, they can boost their sagging economy now and long after the pandemic has passed. 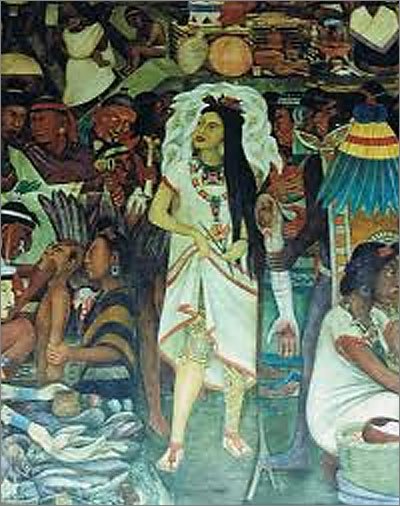 About the sacrificial platform — The Aztecs believed the gods were weak and required human blood, especially blood of the human heart to succeed in the battle over the forces of night. I’m not going to dwell on this. It really requires a more complete understanding of the Aztec worldview and religion than I have time for here. I think it is important to understand ALL of Mexico’s history to understand Mexico City not just focus on its pre-Columbian past, so I have to edit this talk or we’ll be here for days!

We don’t really know how Aztec society would have developed, whether human sacrifice would have been abandoned and the emphasis on art and poetry, technology, and craft would have won the day. One thing we can be fairly certain of is that there would have, at some point, been a rebellion against Mexica tyranny. In fact, there was. When the Tlaxcalans formed an alliance with Cortez and when La Malinche, the slave girl given to Cortez, acted as a spy enabling the Spaniards to escape slaughter at the hands of the Cholulans, these acts were manifestations of that rebellion.

But at any rate with the aid of La Malinche — pictured here in Diego Rivera’s mural — Cortez marched into Tenochtitlan in 1519 and within two years had completely vanquished the Aztecs. 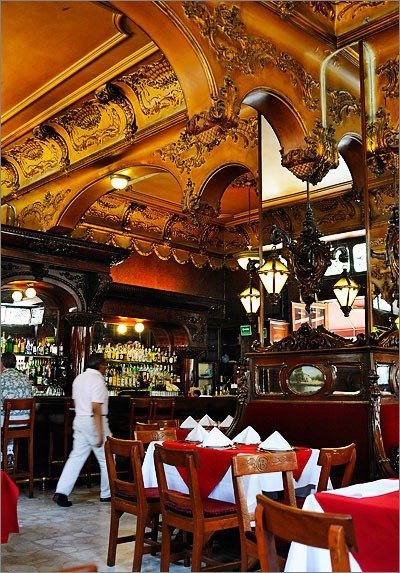 I am not going to go into all the battles, Moctezuma’s weaknesses, capture and death, the Noche Triste when the Spaniards were defeated and had to escape with their lives, smallpox during the Spanish siege of Tenochitlan, the capture and torture of Cuahtemoc, the last emperor of the Aztecs. Only to say that by 1521, the Aztecs were defeated, the city of Tenochitlan razed and Cortez began to establish the first Spanish capital in Mexico. For that, he settled in a Tepanac stronghold called Coyoacan.

. . . opens the doors to Mexico City’s opulent mansions and lets you go behind the high walls into a world as mysterious as the country’s ancient past.
— Betty M.
Charlotte, NC

We”ll now spend some time in the impressive Museum of the Templo Mayor to take a look at the Aztec art and then wander over to the Bar Opera, into which Pancho Villa once rode his horse and shot a hole through the wall, where we can knock back a few tequilas to celebrate our first day in Mexico and also the end of longest section of my talk.

When the Tepanacs, enemies of the Mexicas, invited Cortez to build his capital in Coyoacan, the city was separated from Tenochitlan by rivers and forests. Today the sprawl of Mexico City has reached Coyoacan, but still it is a wonderful place to spend the day, full of parks, charming side streets and lovely little plazas, like the one surrounding the first church built in the new world — Capilla de la Santa Maria de la Concepcion Imaculata, or La Conchita as it is called. 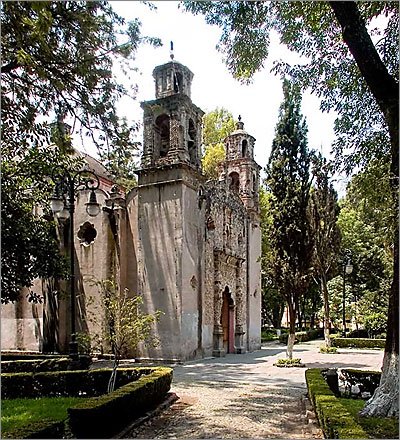 In this church, we see the blending of the old and new worlds, the mudejar arch of the moors, the early Baroque and so on, the indigenous religion — the sun and the moon and the floral pattern in the reliefs on the church facade. We see the artistic manifestation of the social experiment, if you will, of mestizaje, a mixing of the races that took hold in Mexico as in no other country in the western hemisphere and shaped its art, architecture, government, economy and even its national psyche.

This simple church, the first one built in Mesoamerica, would be followed by another small church for the Indians called Santa Caterina and finally, once Tenochitlan was habitable again, by a small church in the Zocolo, or Plaza Mayor, of what was now the new Mexico City. It would take two hundred years to become the magnificent, baroque Metropolitan Cathedral that it is today.

However right now before we leave Coyacan, we’ll have to psychologically propel ourselves out of the 16th century and into the 20th century for a stop at Frida Kahlo’s Casa Azul just a few blocks away.